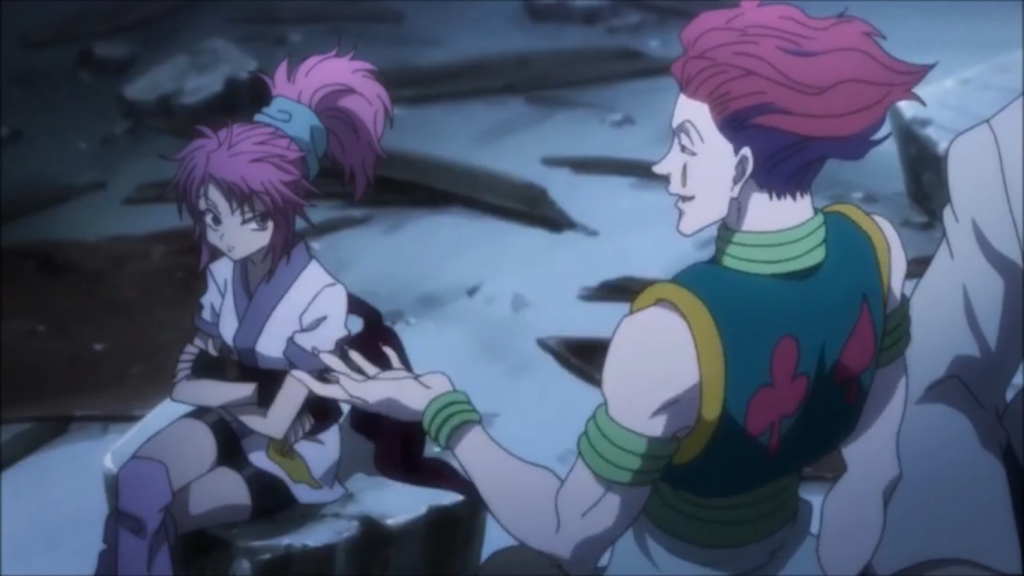 Hisoka and Machi seem to have an interesting relationship. By relationship I don’t mean to say that they are a couple because they are clearly not. From what can be inferred by watching the episodes, Hisoka does have some interest in Machi.

After Hisoka’s fight with Kastro, his arms get cut off. Hisoka calls up Machi to fix his arms using her nen stitches and after the job is done, Hisoka asks Machi to join him for dinner. Now, apart from Machi, Hisoka has never shown interest in any other female. Perhaps she is someone he is romantically attached to.

Now, Hisoka is a person who is very much into his own pursuits be it fighting challenging opponents, accomplishing difficult feats, going on his own trips etc. However, romance isn’t something we usually associate Hisoka with. Hisoka seems to derive a lot of thrill from fighting difficult opponents which some people feel he has a fet*** for and is s**ual in nature, however we hardly think of Hisoka as someone who places much importance to the aspect called love.

From what it looks like, Hisoka is likely to be romantically inclined to Machi. Perhaps he got his arms cut, just so he could watch Machi fix them and in a way he could spend time with her.

However the main question is, whether Machi is interested in Hisoka or not. Now, Machi does show up to stitch his arms and she is paid for it. Perhaps she does it because Hisoka is a member of the Phantom Troupe and she feels it is her duty to do so. She is not interested in listening to his chit chat. She also tends to think a lot about Hisoka. Even though she ignores him when he asks her to go on dinner with him, as she is walking down the road we come to know a little about her thoughts on Hisoka. She first mentions about how Hisoka never talks about the past because he isn’t interested in it. She talks about how Hisoka doesn’t belong to anything or anyone and that he is his own man because he is absolutely convinced that he is the most powerful.

So, now Hisoka did speak about his past to Machi when he mentioned his favorite bubblegum as a child called Bungee Gum. Bungee Gum was also what he named his technique after. Machi probably didn’t pay any attention to that or maybe it didn’t strike her mind when she thought of Hisoka not speaking about his past. Apart from that, Machi thinks of Hisoka as his own man and not belonging to anyone. Maybe that was one reason why Machi decided to not consider Hisoka. Hisoka’s selfish nature and tendency to cater only to his own interests might have put Machi off. Machi would have decided that it was best to stay away from Hisoka and she is also well known for her intution.

So, it could be possible that Machi might have some feelings for Hisoka but decided that it was best to stay away from him.